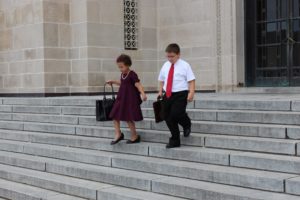 Last week, the Nebraska Legislature adjourned sine die, four days ahead of schedule. In total, 667 bills were introduced and considered by legislators over the course of the session. Each year, Voices for Children sets legislative priorities that are driven by data and research to move the needle for all Nebraska kids. Here’s a quick recap of how kids fared this session:

The Legislature approved LB 225 (Sen. Crawford) unanimously, which extends the ongoing Alternative Response pilot project in the state child welfare system. The project allows for a more collaborative and family-focused approach to children who come to the attention of child protective services as a part of a federal waiver demonstration project. LB 180 (Sen. Bolz) was also approved unanimously, which will allow for bridge custody orders to transfer jurisdiction from juvenile court to district court in certain cases where a state ward is placed safely in the care of one legal parent.

Still, lawmakers failed to reverse a line-item veto issued by Governor Ricketts that cut $1.3 million from the child welfare aid program at a critical time when caseloads are dangerously high and the number of state wards has been steadily increasing. LB 189 (Sen. Howard) would have alleviated caseload concerns, but remains in committee. Voices for Children will continue to monitor the impact of these short-sighted cuts, alongside recent reports of children in foster care facing significant delays in behavioral health care.

LB 235 (Walz), amended into LB 512 (Education Committee) was successfully signed into law, and makes technical changes to existing law that will allow more schools and nonprofits to access grant funds to expand access to food in low-income areas through the Summer Food Service Program (SFSP). Senators failed to advance another bill that would have eased food insecurity for hardworking Nebraska families by a single vote on the first round of debate. LB 358 (Sen. McCollister) would have allowed more families to accept a raise or balance growing household budget needs without losing Supplemental Nutrition Assistance Program (SNAP) benefits.

The Unicameral adjourned without taking action on a number of pro-kid and pro-family issues. LB 108 (Sen. Crawford) remains in committee and would have made taken steps to enhance child-parent relationship through arrest and incarceration. The Banking, Commerce, and Insurance Committee heard impassioned pleas from families to protect hardworking Nebraska families from harmful predatory lending practices in LB 194 (Sen. Vargas), but the committee took no action on the bill. Finally, LB 305 (Sen. Crawford), which would have ensured that more Nebraska workers are able to take paid time off when they need to care for a family member or when faced with a serious illness or pregnancy, remains in committee.

In a major victory for Nebraska kids and families, the Legislature successfully sustained a filibuster on LB 461 (Sen. Smith), which created income tax “triggers” that brought little to no benefit for low- and middle-income families. At a time when services for abused and neglected children and supports for families struggling to pay the bills are being slashed, the passage of LB 461 would have sent a troubling message to Nebraska families and had a devastating impact on community and infrastructure needs for decades to come.

LB 427 and LB 428 (Sen. Vargas), a package of bills that create protections and supports for pregnant and parenting students, was successfully signed into law. Together, the bills seek to reduce barriers that teen parents often face in pursuing educational success.

Legislators took action on juvenile justice early in session. LB 8 (Sen. Krist), which brings practices within juvenile probation in line with developmental science and research, advanced unanimously. Senators also unanimously approved LB 11 (Sen. Krist), which clarifies the timing for an appeal when a young person is transferred from juvenile court to criminal court, ensuring that the process is expedited and allows for rehabilitation to occur in a timely manner.

Senators failed to vote on an important bill that would have protected the Constitutional right to counsel for Nebraska youth. Data show that this right is largely determined by geography in Nebraska, and LB 158 (Sen. Pansing Brooks) would have ensured that all Nebraska youth have meaningful access to counsel in complicated court proceedings against them. LB 179 (Sen. Bolz), which would extend services and supports currently offered to former foster youth through Bridge to Independence (b2i) to certain youth transitioning from the juvenile justice system, remains in committee.

Finally, the legislature successfully prevented a dangerous education bill from becoming law. LB 595 (Sen. Groene) would have given teachers and administrators unchecked discretion to use physical restraint and classroom removal on students, and did not include provisions that empower to schools meaningfully address student behaviors and mental health needs.

In the coming weeks, Voices for Children will be releasing a more comprehensive overview of our legislative work this session in our annual sine die report– stay tuned! We will also be continuing to advance pro-kid policy over the interim, so be sure to sign up for our advoKID to get the latest updates on your favorite issues, straight to your inbox!

Your ticket for the: Pro-Kid Progress in the 105th Nebraska Legislature