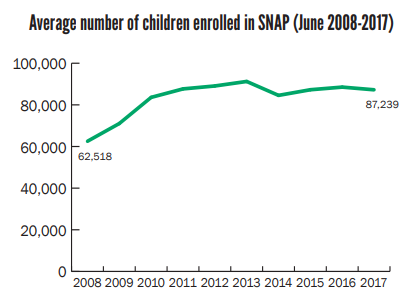 Last month, the Trump administration announced a new proposed rule that would take away food assistance from working families who are struggling to make ends meet. The proposed rule would make an estimated 3 million Americans ineligible for the Supplemental Nutrition Assistance Program (SNAP).

What the proposal does
If adopted, the rule would take away flexibility in how states administer the SNAP program by eliminating what’s called “broad-based categorical eligibility” (BBCE). This flexibility allows states to address the “cliff effect,” where low-income workers become ineligible for assistance when they receive a small raise at work or take on extra hours.

How the proposal affects Nebraskans
Under BBCE, states can simplify the SNAP application process and have the option to increase the income level at which families are eligible for SNAP, or increase the amount of savings that families can have while receiving SNAP. Nebraska has utilized BBCE to ensure that families aren’t punished for having a modest amount of rainy day savings by increasing the asset limit for program participants. The proposed rule would force Nebraska families to choose between food assistance and spending down their savings to $3,500.

Who receives SNAP in Nebraska
In 2017, SNAP protected 87,000 Nebraska children from hunger, and lifted 8,600 Nebraska families out of poverty. Working families shouldn’t have to choose between making ends meet and saving for a brighter future.

ACT NOW: Submit a comment opposing the proposal by September 23
Join us in standing against this harmful proposal to punish Nebraska’s children and families. The administration must consider public comments on the issue before it can be finalized, and will be accepting comments until September 23. You can submit a comment through this portal from our friends at the Food Research and Action Center.

For more information on broad-based categorical eligibility in SNAP, check out this report from the Center on Budget and Policy Priorities.

Your ticket for the: New Federal Rule Would Increase Child Hunger in Nebraska