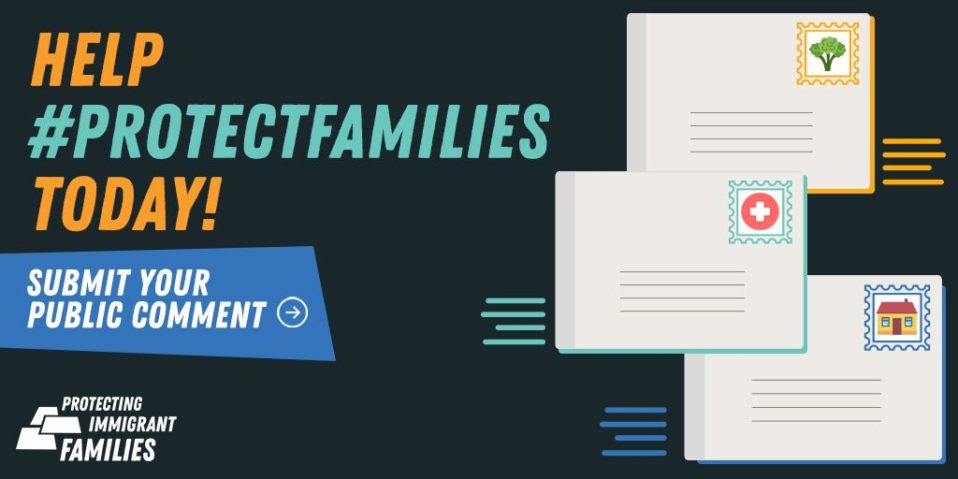 A few weeks ago, we wrote about a new proposed federal rule, called “public charge,” that would penalize tax-paying immigrant families who are working toward a better future for their children. For more information on the rule, check out our blog post here. In this follow-up blog, we outline how Nebraskans can take action to prevent this harmful and cruel rule from taking effect.

Yesterday, the proposed public charge rule was published on the Federal Register. We are proud to join over 1,500 organizations from across the country in opposing the proposed rule, and we need you to join us.

What’s At Stake
No family should have to chose between a temporary need for assistance and longer term security. As written, the proposed rule would expand those affected by the public charge policy from cash assistance (such as SSI and TANF) and long-term institutional care, to include a host of other public programs that offer crucial work supports, including Medicaid, the Supplemental Nutrition Assistance Program (SNAP), housing assistance, and Medicare prescription drug benefits.

In its notice, the Department of Homeland Security contemplates the inclusion of the Children’s Health Insurance Program (CHIP) to the list of benefits for a public charge determination and is specifically requesting feedback on its inclusion in the final rule.

We strongly oppose this rule and its potential for dismantling years of progress in health and well-being for Nebraska kids and families, particularly on the inclusion of Medicaid and SNAP, and potentially CHIP.

The proposed rule would impact immigrant families where a family member is in the process of applying for a green card. However, the rule will also have a wider impact on many more immigrant families. The potential impact of the rule, compounded by the recent actions and discourse of the Administration, has already created anxiety and fear among immigrant families. Although the rule is far from being in effect, communities have reported a “chilling effect” among families with at least one non-citizen immigrant who are worried about all interactions with public systems. It is estimated that as many as 24 million people, including 9 million children, across the country would be affected by this secondary effect.

What to Know about Public Comments
The 60-day public comment period is open from now until December 10, 2018. In order to stop this rule from taking effect, we need all hands on deck! Before the rule can become final, the government must first give the public an opportunity to provide feedback in the form of a “public comment,” then review and respond to each comment. Your individual input could stop this harmful rule from taking effect. Taking action in the public rulemaking process is a little different from our usual advocacy actions, so keep these tips in mind:

We encourage you to join us in taking a few minutes today to submit a public comment on this cruel attack on children and families in Nebraska. Please visit the Protecting Immigrant Families campaign for more information and use their portal to submit comments directly to the Federal Register.

If you have questions about public charge or submitting a public comment, please reach out to Julia Tse at jtse@voicesforchildren.com or 402-597-3100.

Your ticket for the: ACT NOW: Protect Access to Health Care, Food Assistance for Nebraska Families