On the backs of children: AHCA and Nebraska’s children in foster care 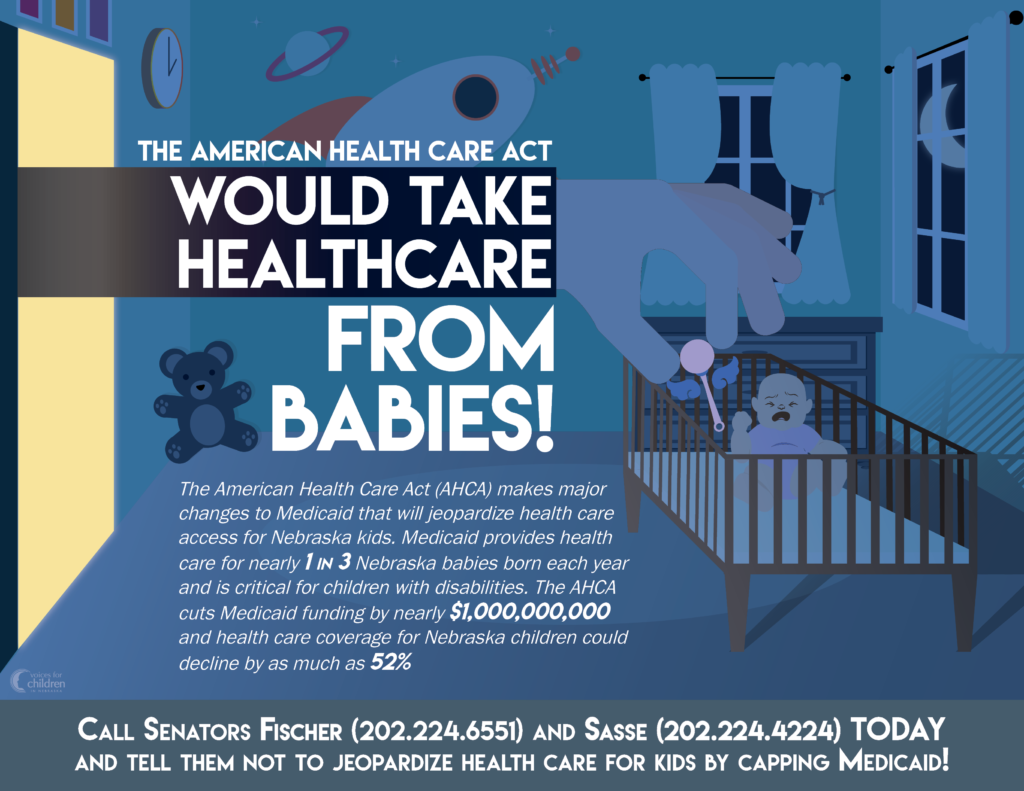 In the last few weeks, Voices for Children has delved extensively into the future of Medicaid under the AHCA, including a case study of the cap enacted in Puerto Rico, the financial strain that schools will face, and the impact on small towns and rural communities. This blog post will focus on how the AHCA will impact Nebraska’s children in foster care.

As the U.S. Senate prepares to vote on its version of a health care reform bill next month, public concern has largely focused on provisions that would slash tax credits, let states waive protections for people with preexisting conditions, and eliminate expansion funding for states. An often underreported, but devastating impact of the House bill is that it would directly shift nearly $900 billion in health care funding from children, seniors, and people with disabilities to the wealthiest. This has been estimated to amount to a $135 million reduction from non-disabled Nebraska children over six years.

How it works:
Currently, federal funds are tied to the actual needs of a state’s Medicaid-eligible population. Under the AHCA, states would receive significantly less funding to care for its most vulnerable citizens. The bill establishes fixed caps for five population groups: seniors, people with disabilities, children, adults newly eligible under Medicaid expansion, and other adults. Using each cap, states receive funds based on how many Medicaid enrollees are in each of the five subgroups. As we have seen with the Temporary Assistance to Needy Families (TANF) block grant, capped funding levels erode over time due to inflation and population growth. For example, since 2000, TANF lost 1/3 of its value due to inflation.

Though this change has been billed as offering states greater flexibility, in practical terms, it will likely force states to make unprecedented cuts or ration care among the most vulnerable. Many states, like Nebraska, faced with substantial revenue shortfalls, will be unable to cover Medicaid costs under this fixed fiscal model.

Why the AHCA hurts abused and neglected children:
Most children in foster care are currently eligible for Medicaid. The caps proposed in the AHCA will likely be an amount that does not account for children with significant health needs. Even when compared to other children who are eligible for Medicaid, children in foster care experience much higher rates of behavioral disorders and mental health diagnoses, and are more likely to require costly inpatient care.

This is exacerbated by the fact that it remains unclear how the caps might account for a sudden influx in Medicaid-eligible foster youth. For months, the number of children who come into the state’s care has been steadily increasing across the state, as high as 11.2% over a six-month period in the southeastern part of the state. The Nebraska Department of Health and Human Services contends that the rise is due to parental alcohol and drug use, which has reached crisis-levels in other states recently. In addition to the Medicaid cuts contained in the bill, the AHCA also allows states to waive essential health benefits (EHB) standards established in the Affordable Care Act (ACA) that include mental health services. Prior to the passage of the ACA, many private insurance plans lacked EHB coverage for services such as maternity, prescription drugs and mental health.  Therefore, not only does the AHCA undermine coverage for low-income parents through Medicaid, it jeopardizes mental health and addiction services for all parents, which are key features of an effective child maltreatment prevention model.

Moreover, there remains a lack of clarity on a number of issues regarding former foster youth who have aged out of the system, who are eligible to continue receiving Medicaid to the age of 26, including:

Our child welfare system represents society’s collective commitment to serving and protecting maltreated children. Under the AHCA, this commitment to our children is imperiled with an arbitrary cap on services that foster youth need.

Nebraska’s chronically understaffed and overburdened foster care system was already dealt a blow this May, when the Governor line-item vetoed $1.2 million in child welfare aid, but there is still time to protect our most vulnerable children in Nebraska. The Senate is expected to vote before the July 4th recess—contact Senator Deb Fischer and Senator Ben Sasse TODAY and ask them how they intend to protect health care access for Nebraska’s abused and neglected children!

Your ticket for the: On the backs of children: AHCA and Nebraska’s children in foster care

On the backs of children: AHCA and Nebraska’s children in foster care