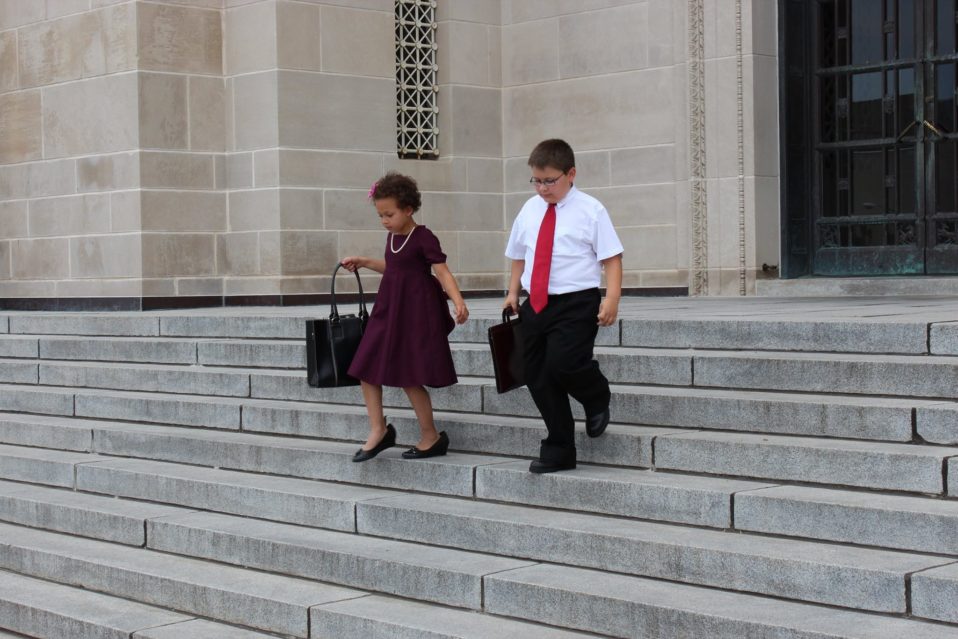 Our state senators make a lot of choices over the course of the legislative session, and the 105th Legislative Session (2017-2018) was no exception. During the two year session, 15 of Voices for Children’s priority bills made it to a final vote before the full body. We present our third Pro-Kid Legislative Scorecard‒ a complete accounting of how senators voted when it came to pro-kid policies during the 105th Nebraska Legislature.

Scorecard Methodology
The votes included in the Scorecard are the final votes on each bill. All votes consistent with Voices for Children’s position on the bill earn one point. We equate “Present – Not Voting” (PNV) votes with a “No” vote. For example, both a “No” and “PNV” vote on a bill we opposed, such as creating a new felony offense of firearm possession for juveniles, earns one point, while a “Yes” vote earns zero points. Similarly, a “Yes” vote on a bill we supported, such as lowering the gross income limit for food stamps, earns one point, while a “No” and “PNV” vote earns zero points.

We do not count votes that were “Excused – Not Voting” (ENV), so senators have different possible totals based on which votes they were present for. Senators Joni Craighead and Theresa Thibodeau each only served one year of the biennium and thus have the fewest possible votes; Senator Thibodeau was appointed to represent District 6 when Senator Craighead resigned in 2017.

Results
No senator’s tenure is the sum of just a few votes, but we believe it is important to show the public where our elected officials stand on a broad range of issues that matter for kids and families. To that end, the bills we selected multiple issue areas that Voices for Children works in: child welfare, economic stability, health, and juvenile justice.

Pro-Kid Votes
LB 8 (Krist): The bill changes provisions relating to juvenile probation to allow for probation officers to respond to a violation of the terms and conditions of a juvenile’s probation with graduated response sanctions and incentives. The bill also emphasizes that youth should not be incarcerated for technical violations of probation. Voices for Children supported LB 8. Bill passed, 45-0-0 (March 23, 2017).

LB 158 (Pansing Brooks): The bill would have required that all juveniles charged in juvenile court are appointed counsel and informed of their right to continued counsel by expanding existing statute that are currently applicable to counties with 150,000 or more inhabitants. The bill would allow juveniles to rescind any waiver of counsel at any time, and require that the Nebraska Supreme Court periodically review and maintain guidelines for2018ProKidScorecard attorneys representing juveniles or serving as guardians ad litem. Voices for Children supported LB 158. A motion to invoke cloture on a motion to reconsider a motion to bracket the bill until April 18, 2018, failed, 31-8-4 (March 14, 2018).

LB 194 (Vargas): As introduced, the bill would have reformed payday lending in the state to ensure that the loans are more affordable and fair to consumers by capping charges, interest, and fees, and spreading the costs more evenly over a longer period of time. As amended by AM 2587, the bill no longer includes changes to the payday loan product, but takes first steps in closing a loophole that has been exploited in other states, implementing new reporting requirements, and provides borrowers with the option of a payment plan once per year. Voices for Children supported LB 194. Bill passed, 49-0-0 (April 18, 2018).

LB 225 (Crawford): The bill extends the sunset for the Alternative Response pilot project to December 31, 2020 and allows for statewide expansion of the pilot. The bill also creates reporting requirements regarding the pilot and capacity to make the pilot permanent. The bill was amended to include provisions of three separate child welfare bills, including: LB 297, to create the Children and Juveniles Data Pilot Project; LB 298, to apply certain provisions of the Nebraska Strengthening Families Act to include youth in the juvenile justice system; and LB 336, to allow for a reasonable fee to be charged for a central registry check. Voices for Children supported LB 225, LB 297 and LB 298. Bill passed 48-0-1 (April 24, 2017).

LB 358 (McCollister): The bill would have eased the cliff effect in the Supplemental Nutrition Assistance Program (SNAP) by increasing the gross income eligibility to 185% of federal poverty level (FPL) over a two year time period for recipients. As amended by AM 493, the bill lowered the increase to 158% of FPL. Voices for Children supported LB 358. Bill failed to advance from General File, 24-19-2 (April 11, 2017).

LB 427 (Vargas): The bill requires public and private schools to make accommodations for students to express and store breastmilk in a private location. It also provides that a student parent may breastfeed her child at any public or private school. As amended by AM 739, the bill incorporates provisions of LB 428, to require that each school district adopt a written policy for the 2018-19 school year regarding accommodations and supports for pregnant and parenting students. Voices for Children supported LB 427 and LB 428. Bill passed, 31-7-10 (May 2, 2017).

LB 461 (Smith): The bill, as introduced, was a placeholder and corrected references to federal statute. As amended by committee amendment AM 954, the bill changed income tax provisions, collapsing four existing tax brackets into three, and created a set of personal income and corporate income tax triggers to reduce the top rate. Voices for Children opposed LB 461. A motion to invoke cloture on amendments to the bill failed, 27-9-13 (May 2, 2017).

LB 670 (Krist): The bill changes membership, powers, and duties of the Nebraska Coalition for Juvenile Justice. As amended by committee amendment AM 8093, the bill also includes provisions from four technical bills, including: LB 708, to clarify provisions related to juvenile court bridge orders; LB 516, to clarify reporting requirements regarding the placement of youth in room confinement; LB 774, to clarify requirements for peace officers taking juveniles under the age of 11 into temporary custody; and LB 673, which clarifies requirements for preliminary hearings for juveniles. The bill is further amended by AM 2874 to include provisions of LB 1112, introduced by Sen. Vargas, which requires that placement of a juvenile at a Youth Rehabilitation and Treatment Center is limited to immediate and urgent necessity. The bill requires that placement in such facilities only occur if the physical safety of the community is seriously threatened or if such detention is necessary to secure the presence of the juvenile at the next hearing. Voices for Children supported LB 516, LB 673, LB 774, and LB 1112. Bill passed, 37-4-8 (April 18, 2018).

LB 714 (Howard): The bill provides a procedure for a teenager living independently to obtain emancipation by filing a petition in district court. The court, in making its determination, must consider whether the minor is able to support themselves financially, whether they are sufficiently mature to manage their affairs, and whether emancipation is in the minor’s best interest. The court must advise the minor of the consequences of emancipation and inform them of the benefits and services available to the emancipated minor. As amended by committee amendment AM 1754, the bill provides further guidance for proceedings and procedural timelines. The committee amendment was further amended by AM 2715, which provides additional procedural guidelines. Voices for Children supported LB 714. Bill passed, 45-1-2 (April 11, 2018).

LB 931 (Howard): The bill creates protections for the prescription of opioids for minors by prohibiting such prescription for more than seven days, except for those suffering from chronic pain, a cancer diagnosis, or palliative care. A prescription for more than a seven-day supply must include certain documentation. As amended by committee amendment AM 1849, makes clarifications and inserts provisions from LB 993 and LB 934. Voices for Children supported LB 931. Bill passed, 48-0-1 (March 29, 2018).

LB 990 (Wayne): The bill creates a new felony offense of possession of a firearm by a prohibited juvenile offender if the individual has previously been adjudicated an offender in juvenile court for an act which would constitute a felony, an act which would constitute a misdemeanor crime of domestic violence, is a fugitive from justice, or is the subject of a current and valid domestic violence protection order, or sexual assault protection order and knowingly violated that order. As amended by committee amendment AM 2209, the circumstances in which such a felony applies is limited to a prior felony or misdemeanor crime of domestic violence. The amendment also reduces the penalty for such an offense from a Class IIIA felony to a Class IV felony for a first offense, and from a Class III felony to a Class IIIA felony for a subsequent offense. The amendment further requires that the juvenile court must inform the juvenile that adjudication for such an act will have a specific legal impact on their right to possess a firearm. Voices for Children opposed LB 990. Bill passed, 41-0-6 (April 11, 2018).

LB 998 (Walz): The bill creates the Collaborative Behavioral & Mental Health Program, which places a social worker within each Educational Service Unit (ESU) to coordinate with local school districts in assisting students in need of mental or behavioral health services, and coordinating resources and necessary training. As amended by AM 2044, AM 2572, and AM 2713, a number of clarifications are made regarding funding and administration. Voices for Children supported LB 998. Bill passed, 31-15-3 (April 18, 2018), but was returned without approval by the Governor after Sine Die (April 23, 2018).

LR 26 (Vargas): The bill resolves that the Legislature opposes any federal action rescinding Deferred Action for Childhood Arrivals (DACA) or any other action that results in restrictions that would act as barriers to the continued contributions of young immigrants and their families to Nebraska communities and the people of Nebraska. Voices for Children supported LR 26. Bill adopted, 24-1-17 (May 15, 2017).

Download the full PDF version of the 2018 Pro-Kid Legislative Scorecard.

Your ticket for the: 2018 Pro-Kid Legislative Scorecard