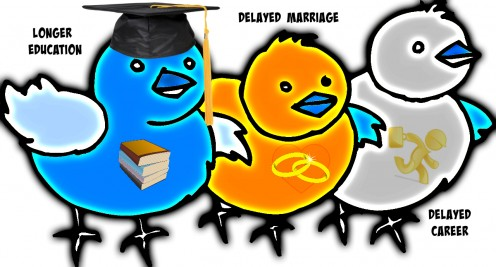 The 2016 Kids Count in Nebraska Report includes an in-depth look at the first steps young people take along their transition away from childhood – emerging adulthood. This is a time of profound growth and development coupled with frequent life changes. The decisions made during these years lead to lifelong decisions impacted the next generation of Nebraska’s workforce and families.

For years, youth was thought to end around age 18 or upon graduation from high school and the beginnings of careers or higher education. These years from late teens to early twenties are spent building the foundation for future wealth, occupational training, and achievements that impact the remainder of adulthood. While legally adults at age 19 in Nebraska, this time period is one of profound change and development. Exploration of love, work, and world views shift and change over the course of this stage. In the past half century, the age of marriage and childbearing has steadily increased, allowing for the immediate years following high school to be a time of change and exploration of life paths. It is no longer expected for those in their late teens and early twenties to have already settled in to long-term, adult roles. Because of these changes in expectations, some have determined the late teens and early twenties to be a distinct developmental age known as “Emerging Adulthood.”

Emerging adults, especially those 18-24 years old, are at a unique point in their life characterized by relative independence from social roles and normative expectations. This age, more than any other point throughout the course of life, allows for independent exploration of life’s possibilities with few outside responsibilities. There are few requirements for these young people, thereby making demographic status unpredictable and volatile. These years of development are characterized by instability, frequent transitions, and increased access to other emerging adults who are demographically different. Demographic transitions and fluctuations make it difficult to categorize emerging adults as adults. In fact, most young people at this age do not consider themselves to be adults, but rather as being in a period between adolescence and adulthood. The top criteria most young people use to consider themselves as adults are characterized by self-sufficiency and include accepting responsibility for one’s self, making independent decisions, and reaching financial independence. Emerging adulthood is a period when self-sufficiency has not yet been reached and many are often still reliant on parents and other family members for assistance – whether financially or for guidance. Identity exploration and formation and character traits continue to develop. It is only after these qualities are established and self-sufficiency is reached, that many make the transition from emerging adulthood to being a young adult, typically in the mid- to late-twenties.

The following data provides a glimpse of the population of Nebraska’s emerging adults. Over the next several weeks we will explore the data related to this age group and make recommendations to ensure that all Nebraska’s young people are set up for lifetime success and opportunity.

Your ticket for the: Emerging Adults – Characteristics and Population