Left Behind By Justice: Children of Incarcerated Parents in Nebraska 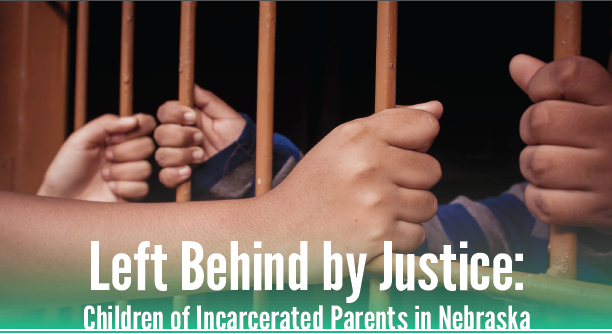 Voices for Children in Nebraska’s recent report, Left Behind by Justice: Children of Incarcerated Parents in Nebraska, highlights the devastating and long-term impact parental incarceration has on children and families. The report considers the existing body of research on parental incarceration and includes findings from a number of “community conversations” held in Nebraska with formerly incarcerated parents and their loved ones to better understand the ripple effects of our justice system.

It is estimated that 41,000 Nebraska children, or nine percent of our total child population, have had a parent in jail or prison at some point in their childhood. Incarceration of a family member is one of a number of adverse childhood experiences (ACEs), which are stressful events or circumstances that activate a significant, oftentimes persistent triggering of the body’s stress response system when a child does not have adequate, supportive adult relationships. This psychological and physiological response can produce lifelong outcomes if left unchecked by caring relationships and environments, known as protective factors.

Unfortunately, neighborhoods that have suffered large losses of residents to incarceration are often also heavily under-resourced to offer such protective factors. Studies also show that communities with disproportionately high rates of incarceration, many of which are predominately black communities, are also often burdened by concentrated poverty, unemployment, and poor health.

During the community conversations held with formerly incarcerated parents and their families, Voices for Children found that overwhelmingly, families identified financial strain as a principal challenge of familial incarceration. “When they lock a parent up, somebody’s got to pick up the slack,” a formerly incarcerated father stated. When a parent is incarcerated, families are faced with tough decisions: new caretaking arrangements, moving to more affordable housing or to a city that was closer to the placement facility, or taking on a second or third job. “[My father] going to prison put a bunch of people in poverty—it put a strain on my grandparents because they had to raise us. It put a strain on us because we no longer had a dad,” another participant said.

Through the community conversations, Voices for Children policy associate Julia Tse gathered important perspectives on the many implications of parental incarceration, including the disproportionate effects on children and families of color, the challenge to meet basic needs, strained family relationships, and the cycle of intergenerational interaction with the justice system. Tse says, “Left Behind by Justice offers multi-pronged recommendations for family-focused justice reform, including strengthening family relationships during incarceration, supporting successful re-entry, and minimizing the effect on families and communities. The conversations with former inmates and their loved ones confirm our belief that more needs to be done on the state level to ensure all Nebraska’s children are adequately supported. By enhancing each of these important component of child well-being, our systems can effectively ease some of the burden borne by the children of incarcerated parents in Nebraska.”

Your ticket for the: Left Behind By Justice: Children of Incarcerated Parents in Nebraska

Left Behind By Justice: Children of Incarcerated Parents in Nebraska