TOO MUCH TO LOSE: Call Today to Protect Healthcare for Our Kids

When a child is diagnosed with cancer, suffers a traumatic brain injury, or is struggling with behavioral issues due to abuse, health insurance ensures that these kids have access to the care they need to recover and heal. In Nebraska, Medicaid provides health care for nearly one-third of all children.

Together, Medicaid and the Children’s Health Insurance Program (CHIP) have helped improve health outcomes, reduce child mortality, achieve positive academic gains in the classroom and more. These programs have decreased the uninsured rate among children by 50% since 2009, progress that is in serious jeopardy under the American Health Care Act (AHCA). 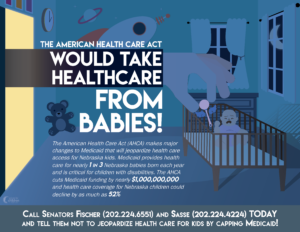 The House version of the bill represents a radical change to the partnership that has existed between the federal and state governments for decades and will shift at least $834 billion from federal Medicaid budget to states over ten years. The Senate version, released today, imposes even more draconian funding caps, particularly in later years, for children, the elderly, and people with disabilities who all rely on Medicaid for their healthcare.

Nebraska would lose $1 billion alone under the House version. To maintain current levels of service and coverage, Nebraska lawmakers will need to increase state Medicaid funding by nearly 25%.

States like Nebraska that are already facing budget shortfalls (nearly $1 billion in the next two years) will not be able to make up the loss and will be forced to impose waiting lists, enrollment caps, eliminating or rationing services, decreased payments to Medicaid providers, or some combination thereof.

If the AHCA becomes law, we will likely see an unconscionable return to high uninsured rates among children. Maybe that is why 75% of Americans are opposed to the Medicaid funding caps in the bill, including a majority of conservative voters.

The stakes for kids have never been higher and Nebraska’s children have too much to lose.

Will you join me in contacting Senator Deb Fischer and Senator Ben Sasse to tell them it is time to stop playing games with healthcare for Nebraska’s kids?

Your ticket for the: TOO MUCH TO LOSE: Call Today to Protect Healthcare for Our Kids

TOO MUCH TO LOSE: Call Today to Protect Healthcare for Our Kids